The Birthday That Changed Everything (2016)

Sally Summers is about to celebrate her 40th birthday and if there's one thing she didn't expect to receive as a present, it's an email from husband Simon saying he's leaving her for a much younger Latvian lap-dancer. Instead of trying to come to terms with what is happening, Sally decides to book a two-week holiday to simply get away from it all for a bit. Together with her kids, lovely Ollie and foul-mouthed teenager Lucy, Sally is determined to have a good time at the Blue Bay Resort in Turkey. This book is a fabulous chick lit read with a brilliant collection of characters, a lovely setting and an incredibly fun and comfortable writing style. Sally is a warm protagonist who's easy to love, just like her lovely son Ollie. Lucy takes a bit of time to get used to but I have to admit her rude words cracked me up more than once. The group of people Sally meets in the resort all had their own individual stories to tell and really brought something else to the table, which was great. There are a few time jumps in the book which really gave the story that much more, and worked really well. Overall, The Birthday That Changed Everything is a stunning, fun, and memorable romantic comedy that left me wanting more; I've got nothing but love for this novel! (JoH)

When her parents died in a car accident, Pippa Harte had to set aside her plans for Oxford University and instead stay home to take care of her younger siblings and the family farm. These days, the farm is a holiday rental place run by Pippa. One day, Ben Retallick, an acquaintance from Pippa's past, hires one of the cottages and immediately there's a connection between the pair of them; a connection that's difficult to ignore. However, Ben has a dark secret and he has come to Cornwall to hide away from the world. Pippa knows she needs to focus and can't use any distractions, but what happens when a distraction is as hard to ignore as handsome Ben? The first chapter of the novel paints a clear picture of main character Pippa’s life and I warmed to her straight away. Pippa is young and already has a lot of responsibility to shoulder; she takes care of her four younger brothers and sisters and the family holiday rental farm business. She’s independent and brave but at the same time she’s at an age where you try to find yourself and what it is you want in life. Mysterious, dark and handsome Ben comes into Pippa’s life at the right time, ready to shake things up a bit. I even developed a little crush on Ben; he’s the perfect hero for a romance story like this one and the chemistry between him and Pippa was definitely there. I liked the fact that while this is a relatively short and quick read, you really get to know the main characters. The storyline is an entertaining one and there was enough going on to keep my attention until the last sentence, and even then I found myself secretly wishing for more. This romance story was a true pleasure to read and one I’d recommend to any romance/chick lit fan. (JoH)

Leah Harvey runs out on her wedding after she discovers her groom in a compromising position with a bridesmaid. She finds herself stranded in rural Scotland in the middle of a snowstorm without a cell phone signal or any supplies to survive. She finds a cottage where she hopes to wait out the storm and meets the inhabitant, Rob Cavelli. Every Christmas Rob heads to the remote cottage to hide from his pain and the guilt he carries and is unable to let go of. When he opens the front door to find a bride, gorgeous and nearly frozen, he brings her in to his cottage and his life, against his better judgment. Leah and Rob spend Christmas together exploring the attraction they both feel and when Christmas is over, Leah accepts an invitation from Rob to go to Chicago with him, but as friends only. I enjoyed this cute and charming story. Leah is a spunky and feisty character who doesn't let the events of her fiance's betrayal and failed wedding hold her back from grabbing a chance at happiness. She takes a huge leap of faith and travels to Chicago with Rob and believes he is the only man for her, in spite of his determination to push her away. I liked Rob when I first met him, but after they returned to Chicago, I didn't care for the change in his behaviour or personality. He became overbearing and at times, downright hurtful to Leah. Even after learning why, I felt bad for him, but still wanted to slap him. It surprised me that Leah continued to believe the best in Rob in spite of his constant rejection and I really liked that she didn't become bitter or hurtful in response. I recommend this book if you are looking for a story about forgiveness and second chances. (SH) 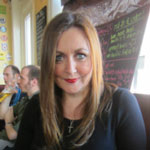 The A-Z of Everything

Never Kiss a Man in a Christmas Jumper