Julia Merriweather Crane is still getting over the loss of her husband, Adam, who died in a car accident. Thanks to her best friend Sharlene, Julia finds herself out on the town at a singles group. She spots her old high school boyfriend, Kristopher. The pair have a coffee and catch-up, and things seem to be going well. You know the saying that things happen in threes? Well for Julia, she is about to have her choice of man as this summer break will bring her the romantic options of Kristopher; Ben, her boyfriend from teacher's college; and Dane, her Hollywood crush. As Julia's love options start to stack up, who will she choose in this second book in the Mirabelle Harbor series? (PP)

Gwen just celebrated her 30th birthday and expected an engagement ring from Richard, her boyfriend of two years. What she got instead were pearl earrings, which according to Richard, are to replace the old ones she always wears. Apparently Richard does not fully appreciate the sentiment behind wearing the pearl earrings of her late mother. Her aunt Bea, on the other hand, generously gifts her with a tour of Europe along with Bea and her Mahjong and Suduko club. Gwen is not entirely sure about going but after her birthday dinner with Richard, decides it might be good for them to spend some time apart. Gwen and Bea embark on the trip of a lifetime, meeting some fairly interesting characters along the way who help Gwen open her eyes to what it means to really live. One of those characters is Emerson, an English physicist who has the potential to be someone very special to Gwen. That is if she can muster the courage to see beyond her stable, predictable life with Richard and truly follow her heart.
After enjoying Marilyn Brant's last two books, I was excited to read A Summer in Europe. I am happy to say her books just keep getting better. I was completely hooked as soon as I started reading and thoroughly enjoyed the evolution of Gwen, from a shy and reserved teacher to someone who, by the end of the book, has really come out of her shell and understands about living a passionate life. An extremely delightful and satisfying read. (LEK)

Long-time friends Bridget, Jennifer and Tamara meet at the Indigo Moon Cafe every Friday morning to catch up over mocha lattes and grilled chocolate chip muffins. One September morning, Jennifer reveals she has been in contact with her college boyfriend, David. Although their communication has been innocent enough, she admits to a growing flirtation and has recently started to wonder how life might have been different had she married him instead of her husband, Michael. Sparked by the discussion that follows, Bridget and Tamara also begin to examine their relationships and wonder if they, too, may have married the wrong man. Fuelled by what-ifs, each woman embarks on her own journey in an effort to figure out whether the life she has is really the life meant for her. When their situations come to a head all at once during the annual Halloween costume party, each woman must stop musing about her life and take action to change it.
Brant's sophomore effort is a brilliant character study of three very different women each asking the question we all wonder about sooner or later: did we make the right choices during our journey and if not, what steps do we need to take in order to live our best life? (LEK)

It is a truth universally acknowledged that a single woman in possession of a romantic heart must be in want of her happily-ever-after. Ellie Barnett is no exception. What is exceptional about Ellie's story, however, is that Miss Jane Austen herself has been giving Ellie romantic advice since she first read Pride and Prejudice at the age of 15. With Miss Austen's guidance, Ellie has learned to classify her romantic interests according to 18th century England. There are the Mr Bingleys (like Jason and Tim) the Colonel Fitzwilliams (Dominic), and of course the dangerous Mr Wickhams (such as Brent and Sam). Like most women, though, she is forever in search of her ever-elusive Mr Darcy. It's not until she is in her 30s and stops to take stock of her dating history that Ellie realises not all men fit neatly into one particular category. And that just maybe she has misclassified one of her former loves.
In a story more than coincidentally parallel to Pride and Prejudice, Marilyn Brant weaves an inventive tale of one woman's search for her heart's desire. I can't help but think how lucky we would all be to have Jane Austen guiding our own romantic adventures. (LEK) 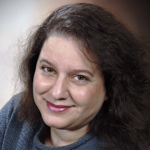