The good news is that after being laid off from her job as a journalist, Joan Dixon has finally landed a new job at Bloom, a start-up run by a group of people 10 years her junior (i.e. dreaded millennials). The bad news is that the job is for a junior copywriter – the bottom rung of a career ladder she has already climbed. While not her ideal position by any means, she is happy to have a steady income and a new group of like-minded friends.
When her curiosity and journalistic instincts kick in, she starts digging below the surface of Bloom's ideal facade and stumbles upon information that might be the big-break story she is looking to write. But should she risk all that is going well for her on something that may ultimately backfire?
While normally a huge fan of Liza Palmer's writing and storytelling, The Nobodies fell flat for me. It took me a while to get into the book and I had a hard time following the story once Joan begins looking into the history of Bloom.
Additionally, I don't feel as if I connected with the characters, which probably has more to do with my age rather than Ms. Palmer's work. All in all, if one was looking for an introduction to Ms. Palmer's books, I would recommend starting with one of her earlier pieces. (LEK)

When Olivia Morten left high school as a lonely, overweight teenager, she swore things were going to be different for her. And boy, are they ever. She lost all of her high school weight (and then some), is the highly successful publicist for some of the hottest celebrities in Los Angeles, and is married to an amazingly gorgeous doctor.
Life is looking pretty good for the new Olivia until she crosses paths with her high school nemesis, Ben Dunn. She is instantly flooded with painful memories of high school and her love/hate relationship with Ben and begins to doubt whether she is in fact the perfect person she has strived so hard to become.
The F Word is a wonderful, smart, and funny story about reinventing yourself into a completely different person in hopes of having a better life but then questioning who you really are when your past comes rushing back to face you head on. Ms Palmer writes books with great characters who always find themselves on a path to discovering who they truly are and The F Word is no exception. (LEK)

Anna Wyatt is on a mission to land the biggest advertising account of her career, which could mean a huge boost for her professionally. To do so, she heads to the Romance Writers' Conference in Phoenix with her new, younger associate, Sasha, and the goal of signing the Romance Cover Model of the Year to star in her campaign. While in Phoenix she meets handsome financial consultant Lincoln Mallory, with whom she has an instant connection.
Having just been on a dating time-out after her divorce, Anna is in the process of reevaluating her life in an effort to put herself first, accept her imperfections, and take more chances. Lincoln definitely falls into that last category, but she's not sure getting involved with him is what is best for her at the moment.
Once the conference is over and she's back in the real world, Anna finds it increasingly difficult to navigate all of the different directions she's being pulled, from work, to her alcoholic brother, Ferdie, and to Lincoln. Her plan of becoming the heroine of her own life isn't working out as well as she had hoped.
Girl Before a Mirror is an enjoyable story filled with real, flawed characters who are at the same time extremely relatable and endearing. Like a lot of women, Anna is juggling work, friends, love, and family while trying to decide if she's actually living the life she dreamed of. I especially like the notion that anyone can change the direction of their life regardless of the path they are currently on. (LEK)

Queen Elizabeth "Queenie" Wake has just returned home to North Star, Texas, after being fired ... again. After several years spent working as a chef in kitchens across the country, she decides it might be time to take stock of her life. While her sister, Merry Carole, and nephew, Cal, welcome her with open arms, the rest of the town still considers the Wake family to be the lowest of the low, even after all these years. When she takes a job cooking last meals in the death house of the local prison, a job she realises she loves, Queenie tries to reconcile the numerous ghosts from her past and contemplates staying in North Star or once again moving on.
This book is emotional, funny and heartbreaking. It's easy to become swept up in the petty high school dramas that play out between the Wake sisters and the mean girls, the small-town atmosphere where everyone knows your business (even when you think they don't), and the sense of purpose and belonging that Queenie is so desperate to find. Liza Palmer (and her books) continues to impress. Do not miss this one. (LEK)

When Frances meets her new boss, she instantly wishes she, too, had Emma's seemingly perfect life. Emma is beautiful, intelligent, has a great job and a loving husband - basically everything Frances aspires to. However, when her perception of the perfect person is shattered in the blink of an eye, Frances must come to terms with how she has always hidden her true self from the world and figure out how she wants to live her life in order to be her happiest.
Liza Palmer has once again created likable, believable characters who are dealing with issues we all feel at some point in our lives. Who hasn't met someone new and instantly thought they had the perfect life? She does a superb job of cutting through the perceptions to reveal the secrets we hide from those around us in order to appear perfect. Quintessential chick lit with a twist. (LEK)

A Field Guide to Burying Your Parents

Grace Hawkes has not spoken to her siblings in five years. The last time she saw them was after their mother died. When she is called on to visit her dying father after he suffers a stroke, she feels she has no choice but to go help her brothers and sister. Despite her dislike of their father - who up and left them when they were little without as much as a reason why - Grace senses that subconsciously she has done exactly the same thing to her siblings - she abandoned them after their mother's death. After much hyperventilating and an almost mini-breakdown, Grace makes the biggest leap of faith in her life and goes to see her estranged family.
Now, seeing them all for the first time in five years in a sombre hospital room, Grace feels like there may be a chance, though it is a real long shot, that they could go back to being a family once again. Also present at the hospital is her father's sinister second wife (who has more of a hidden agenda than an actual love for their father) and Grace's stepbrother. Of course, to complicate things just a bit more, the love of Grace's life, John, whom she also ran away from five years earlier, is also in attendance. Forced to deal with a mirage of emotions that she thought she could bury forever, Grace feels overwhelmed.
Full of family drama, complicated relationships and situations that anyone can relate to, this book captures them all with just the right amount of humour thrown in for good measure. (AS)

Elisabeth Page is having a hard time living up to her wealthy family's expectations. The daughter of a legendary novelist and well-bred socialite and the sister of a literary wunderkid, she's just a pastry chef - even though she works in the hottest French restaurant in LA. Her five-year plan to open her own patisserie hasn't eventuated after 11 years and she is still dating (if you can call it that) her family-approved childhood sweetheart Will, a globe-trotting journalist who's rarely home. Elisabeth's life is going nowhere - her routine takes her from the food markets, to the restaurant and back home to catch up on TiVoed shows.
But then she meets basketball coach Daniel Sullivan, who bids on a cooking lesson with her, and he's everything that her family and Will are not. Her career also looks like taking on a different direction when she gets approached to host a Food Network TV show. Can she find success - and love - on her own terms? A fully flavoured book about food, family dynamics and finding your way.

Conversations with the Fat Girl (2005)

Maggie thought she and Olivia would be best friends forever. Now she's not so sure. After sharing hopes, dreams and being overweight since grade school, Olivia decides to get a gastric bypass and has become someone Maggie barely recognises, both inside and out. With her new body and life, Olivia has found the man of her dreams and maid-of-honour Maggie has been tasked with planning her best friend's wedding shower, and keeping Olivia's secret, overweight childhood from her new friends and fiance.
As she navigates her way through her own insecurities with life and love, Maggie begins to examine her relationship with Olivia and wonders if they really have anything in common anymore.
Honest, heart-warming and spot-on, if you love cheering for the underdog, you will love this debut novel. (LEK) 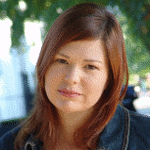