Jacks’ world is shaken when her husband, James, dies in a car accident on Maui. But what shakes her even more is that he was meant to be on a business trip elsewhere and there was another woman in the car with him at the time. Her pain deepens when a guy called Nick shows up on her doorstep, revealing that his fiance, Dylan, was having an affair with James. He wants Jacks to join him in Hawaii so they can each find some answers about their partners’ betrayal and deaths.
This is the authors’ first foray into suspense and the last section really nailed that brief. It’s a pacy read with flashbacks to fill in the gaps of the characters’ back story. Engrossing read.

Jessie loves her son Lucas but every time she looks at him, she remembers that the affair in which he was conceived caused her divorce from her then husband, who is still the love of her life. Gabriela is a world-renowned author who spent her youth chasing literary success, but now she wonders if she has it all wrong and wants to be a mother. Claire is a single mum, with a very strained relationship with her only child, and her constant guilt of not being there for her mother when she needed her most is always on her mind. These three women have been best friends and been there to support each other through the good and the bad. They are offered the opportunity to return to the year they turned forty, to change the course of their lives, and make different choices which they think can make their lives even better than it is now.
This was an emotional story, and have we not all asked if we knew then what we know now, whether we would have made different choices. But at the end of the day, the choices we make will always affect the course of the future, because things would unfold differently, and we see it in this story. Things happened that the women did not expect and in some ways the end was almost impossible to foresee. Great story for those of us who've always wondered, "what if"? (KARM)

Casey and Rachel have been best friends since they were kids, and they couldn't be more different. Rachel is a mother of three including a baby that wasn't expected and the wife to someone she barely recognises, Casey is a host for Gossip TV and interviews celebrities you could only dream of meeting. At their twentieth high school reunion it turns into a night to remember for all the wrong reasons. They wake up in each other's bodies the next morning and wonder how they are going to pull off being each other. Rachel gets a chance to live the broadcasting dreams she gave up when pregnant in college and Casey has to face the reality of why she is really alone. They soon discover they didn't know their best friend or themselves as well as they thought.
This is a book with a difference for me as I haven't read anything like it before. With a storyline that tugged at my heartstrings and co-written by real-life best friends, I saw a lesson in this book, in that you don't know what you have until it's gone. Casey was my favourite character as she's so down to earth and fun, and always happy to help anyone in need. I was rooting for both of them to get their happy ending. (KD)

Jordan and Elle have both recently left relationships they felt were not working for them. Jordan divorced her husband, Kevin, with the hope of finding a more fulfilling life and Elle broke off her engagement to Chase feeling he was not the right person for her. When Elle starts dating Kevin, Jordan second-guesses her desire for their divorce and tries everything in her power to win him back. When Elle sees the lengths Jordan is willing to go to in order to put her family back together, she wonders whether dating a man with baggage is really worth it, and if Chase is, in fact, the one for her.
Written from the points of view of both women, The D Word explores the conflict between what is comfortable and familiar and what you know in your heart to be true. (LEK)

TV producer Kate is depressed and drinking a lot after her latest boyfriend dumps her, while her younger sister Kelly is feeling the strain of being a young married mother. When Kelly meets a gorgeous guy at Starbucks, she convinces her sister to sign up together for his volleyball classes. Once Kate meets coach Tim, she decides he could well be the man of her dreams. But he is too busy making a play for Kelly. Told in alternate chapters from each sister's viewpoint (Fenton wrote the Kelly chapters, while Steinke wrote for Kate.) 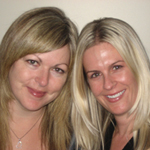 The Status of All Things